Viking longboats, also called “dragon ships” for the decorative figureheads that are featured on many ships, were designed to raid and plunder!  The fore and aft of the boats were identical, so the ship could be rowed safely in either direction, which made it easier to raid villages along smaller rivers and inlets since the crew didn’t ever need to turn the boat around for a quick getaway.  The raider’s shields were hung from hooks along the outsides of the boat to keep them out of the way and to offer a bit of protection.

These longboats had relatively flat bottoms (not a deep keel like other ocean-going vessels) and very little storage (except under the rowers’ benches), so most of their voyages were short in length.

The sails were square and usually made from long pieces of fabric.  If the sail was torn, the Vikings mended it with whatever was available (even if the colors didn’t match), so that is why we see striped sails.

Because the Norsemen, like most sailors of their day, were extremely superstitious and counted on special powers offered by the Gods to protect them and bring success to their journeys, I chose to add Runes to decorate the shields on my Longboat.

While I was reading about Runes, I noticed that there are several different meanings for each symbol (depending on who was writing about them).  These are the names and meanings of the symbols on my shields from left to right:

I wanted to use a Celtic knot that was simple yet had a great meaning and so that’s why I chose this one: 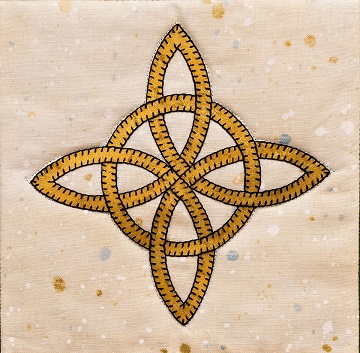 This knot means eternal friendship!  Even if you aren’t interested in making Vikings, would this be great made into a table runner, placemats or hot pads for your BFF!

If you’re feeling inspired to create your own Viking quilt, you can purchase the pattern right here in our pattern shop!  The individual block patterns are available as well.

Days of the Week

Between the first and third centuries, the Greeks and the Romans named all the days of the week according to seven planets, Saturn, Jupiter, Mars, the Sun, Venus, Mercury and the Moon.  Each planet had an hour of the day assigned to them, and the planet which started each day of the week gave its name to that particular day!

Not to be outdone, the Nordic people assigned their own deities to represent each day of the week.  The Nordic peoples appear to have been adept at becoming a part of other cultures, because the names they assigned to the days of the week still exist today with the exception of Saturday.

Sunday to the Nordic people was called “dies Solis” in honor of Sol, the Goddess of the Sun, in old English, the day was called “Sunnandaeg”.  The Germanic people referred to it as “Sonntag” which means “Day of the Sun”.

Monday was named for Mani the God of the Moon.  In old English, the day was “Monandaeg” and Middle English “Monenday” which literally translates as “Day of the Moon”.

Tuesday got its roots from Tiwaz which meant Tyr, another Norse God (he was a Norse war god, who presides over matters of law and justice).  In Olde English the day was called “Tiwesdaeg”.

Wednesday was named after Odin who was also called “Woden”, the day was called “Wodnesdaeg”.

Saturday was named after the planet Saturn and the Roman God Saturn.  In old English the day was called “Saeternesdaeg”.  The Norse people did not have a god that represented the same thing as Saturn, so they would refer to the day as “Sunnenavend” which meant “Sunday Eve”, but that name never caught on.  Others called it “Laugardagr” which meant “washing-day”, another name that we don’t use today.

Who would have known?

Thank you for reading our blog!  We’d love to read your comments, of course.

Sharon Andersen & Susan Hatcher are "Ms P".  We love quilting, and we spend lots of time giggling as we stitch our whimsical designs.  Thanks for visiting us!  :0) 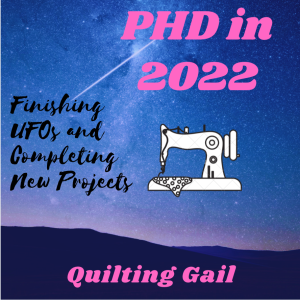 Gremlins, Goblins, and Ghouls Oh My!

Time in a Bottle Blog Hop